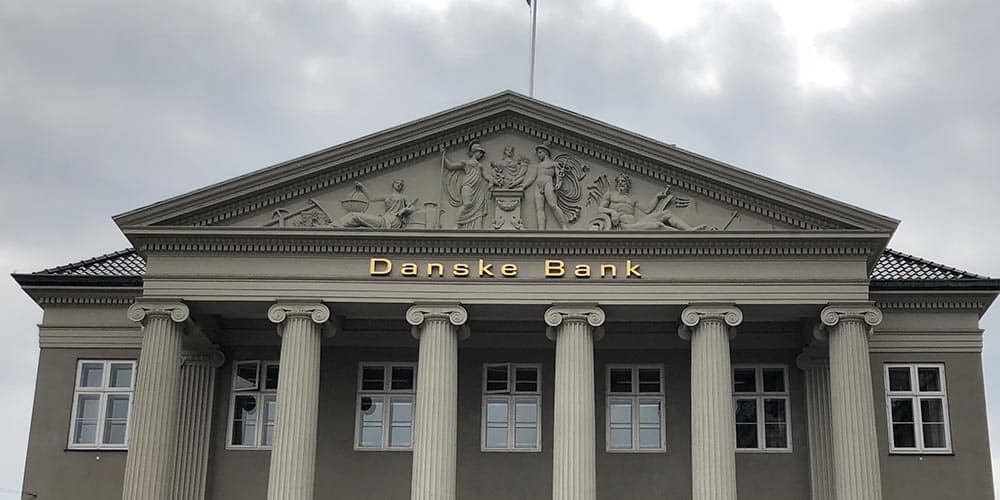 While every time we are surprised by the severity of a money laundering case, another one, with greater magnitude, crops up. However, the Danske Bank scandal might be the biggest case till date. The amount of money involved was more than the whole GDP of the country involved. Of course, this means that the repercussions are going to be serious as well. This time, death was even involved. Let’s have a look at that went down, the causes behind this failure and the consequences.

Described as the largest money laundering scandal in European history, the case began in 2007. In that year, Danske Bank, based in Denmark, acquired the Finnish Sampo Bank, an institution having a branch in Estonia. This is where all the trouble began: Sampo’s non-resident portfolio in Estonia is the root of all the problems.

According to estimations, as from 2007 to 2015, approximately €200 billion of suspicious transactions were processed from Estonia, Russia and other countries through the Estonian branch of Danske Bank. The money laundered was outsourced to Estonia, Latvia, China, Switzerland, Turkey and more areas. If you are a bit confused about the severity of the case, let us put things into perspective for you. The suspicious transactions amounted to around €200 billion. In 2017, the GDP of Estonia as a whole was estimated to be €29 billion. If you want a European comparison, the money laundered is nearly two thirds of the GDP of Denmark, which is €324 billion.

Of course, the charade could not go on forever. With time, things were bound to deteriorate. In 2013, following suspicions that large amounts of money were being laundered to Russia, the US bank JPMorgan Chase decided to stop dealing with the Estonian Branch. In 2014, the Estonian Financial Supervision Authority found “large-scale, long-lasting systemic violations of anti-money laundering rules”. Danish authorities were notified of these findings. An investigation revealed that more than half of the financial institution’s customers were suspicious.

What happened after the discovery: lawsuits… deaths…

Following the big reveal of the bank’s suspicious activities, several countries started investigating the activities of Danske Bank. Moreover, as expected, Danske Bank became persona non-grata in Estonia which decided to give it the boot. The firm’s market value has decreased by more than 50% which left investors furious.

Approximately 60 investors sued Danske Bank for 1.5 billion crowns, which equals to $224 million, because of this money laundering issue. Besides that, what might be considered to be a first in such cases, the ex-CEO of Danske Bank Thomas Borgen, as an individual, was sued as well. A law firm based in Brussels filed a legal complaint against Borgen on behalf of 155 institutional investors. They sought damages worth 358 million euros against him.

Why sue the CEO in a case of money laundering? Thomas Borgen was responsible for the firm’s international operations when all of this took place and it is believed that investors were deliberately misled with regards to the Estonian bank’s financial position. Moreover, four years later a report was published. It showed that Thomas Borgen and “other members of the senior management were briefed in detail by the internal audit team about the illegal activities in Estonia and the substantial risks the bank was facing at the group level”.

Something even more unfortunate and rare in this case is the death of a top executive. Aivar Rehe was the CEO of the branch. Of course with all the scandals surrounding the financial institution, he left in 2015. Shortly afterwards, being a key witness in the criminal investigation that was going on at the time, he was reported missing from his home in greater Tallinn. The police had warned that he was a suicide-risk. Two days later, during a search operation, he was found dead. Reports advanced that the cause of his death is suicide. The pressure must have been too much for him to handle, which is an extremely sad turn of events.

What went so wrong for Danske Bank? While there are so many issues at play here, a large part of the problem is due to not vigorous anti-money laundering protocols. An independent report on the scandal reasserted these sayings by advancing, “Anti-money laundering procedures at the Estonian branch had been manifestly insufficient and inadequate”. In 2015, when it became more than evident that the safety systems in place were not working as they should, Danske shut down the Estonian branch. The latter should have implemented its acquirer’s money launderings controls. However, this was not possible since it had its own IT system. This means that the risk monitoring systems were disparate.

Danske Bank admitted that there were “major deficiencies in controls and governance”. Thus, it was incredibly easy to launder money through the branch. That is why it is incredibly importance to do business in a country that has the appropriate protocols and regulations in place. For instance, Mauritius adheres to international initiatives to combat money laundering in this country. There are several legislations in place to ensure the reliability of financial firms.

This money laundering issue was facilitated by the fact that there was a huge issue with regards to transparency. For instance, the IT-system at the branch and several other documents were written either in Estonian or Russian. Being aware of these differences, Danske Bank did not introduce the necessary changes to facilitate control and regulatory activities for the headquarters in Denmark.

Additionally, there were considerable difficulties identifying the true source of funds, which relates to another instance of lack of transparency. There was inadequate information pertaining to the real owners of customers in the portfolio. Since some of them are registered as limited liability partnerships, they are not required to publish details of their owners.

To ensure transparency in Mauritius, the institution Transparency Mauritius was established. This firm helps the Government against its fight against corruption.